Thanks for visiting! I play the trombone and explore sound, movement, and technology using the instrument and most other things I can get my hands on.

I first heard this tune on Dave Douglas’ podcast A Noise From The Deep and was immediately taken aback by the sublime brass chorale opening. I sought to recreate Carla Bley’s arrangement with the help of live layering and guitar pedals. Here’s the unedited take of me playing trombone and trumpet through Loopy, an Eventide harmonizer, and BiasFX.

Made some incredible friends touring South America with some of the top young musicians in the Americas last summer. Abbey Road engineers came and recorded Gabriela Montero’s Latin Concerto for ARTE while we were in residence at Teatro del Lago. 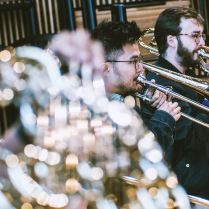 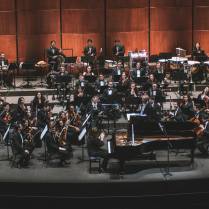 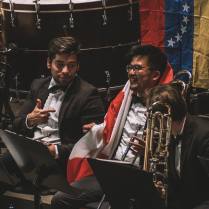 For International Women’s Day, So Wrong It’s Right wanted to make some serious noise for female artists from medieval and pre-medieval times. We broke ground at National Sawdust musing on three remarkable women who formed a deep bedrock of source material for our recording session that evening. For each woman, we dedicated a station that showcased their work, a quasi-installation which dotted the room and formed a route for our exploration. The evening began with a feminist found object jam, a playground of private items from our loved one’s arsenals.

At the first station, we paid tribute to Comtessa de Dia (1175 A.D.) who wrote the earliest surviving work by a trobairitz (female troubadour). Following this, we interpreted three poems by the Greek poet Sappho (630 B.C.) from the island of Lesbos. The third station focused on a beautifully preserved kufic script by the Islamic calligraphist Fadhl Mawlat Abi Ayyub (~907 A.D.)